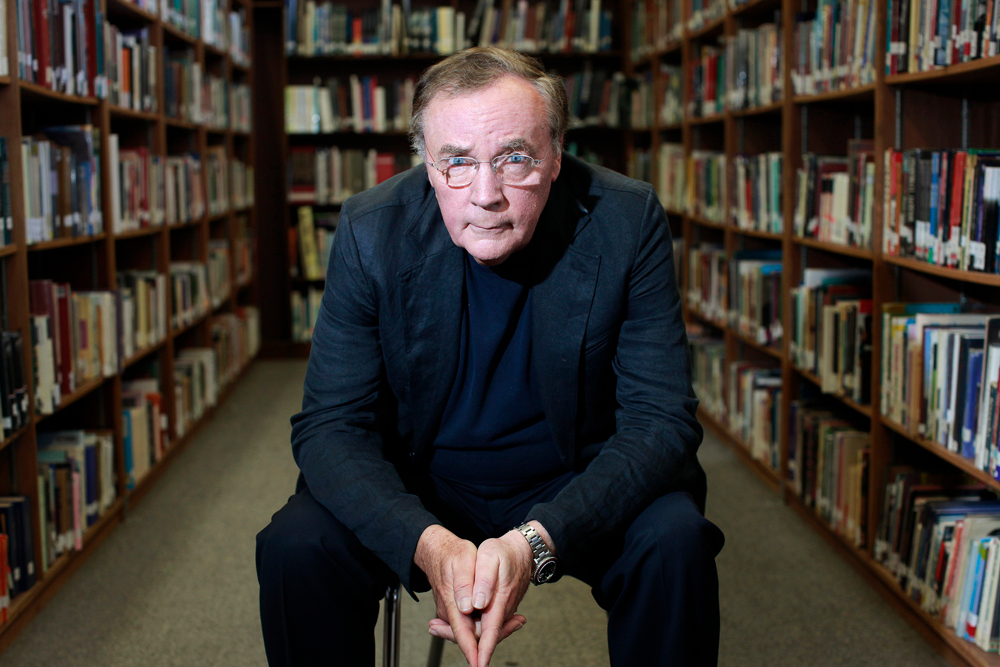 Who’s the best-selling author in the English-speaking world?

Here’s a question for you: Who’s the best-selling author in the English-speaking world? 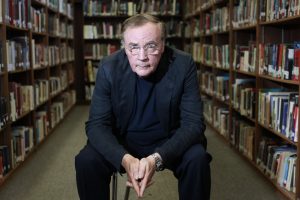 Who else is on the top 10 list? Well, again Patterson is #1 and Rowling is #2. In the #3 spot is Nora Roberts. #4 is Dr. Seuss, whose best-selling title is Oh, the Places You’ll Go. #5 is John Grisham. The #6 spot belongs to Stephenie Meyer, she of “Twilight” fame. #7 goes to Dan Brown of Da Vinci Code fame. # 8 is Nicholas Sparks (remember The Notebook?). # 9 is mystery writer Janet Evanovich and # 10 is Jeff Kinney, whose Dairy of a Wimpy Kid books got my three great-nephews interested in reading. Kinney, whose Wimpy Kid books have sold more than 150 million copies in 45 language, is embarking on a bold new venture – not the creation of more books – though I trust there will be more – or the creation of more movies based on his books (there have been three to date that have grossed more than $225 million) but, instead, the selling of books. Yes, he’s opening a bookstore in his hometown of Plainville, Massachusetts, population 8,000. If this sounds a little economically dicey, it is. Of the consultants, Paz & Associates, who advised him on planning the operation, he says “I’m sure they were thinking we were crazy to open a bookstore in a town of 8,000. Maybe they still do.” And maybe that’s the reason he’s calling the store “An Unlikely Story.”

Of course, Kinney made $20 million last year, so he can probably operate at a loss for a good while, though, as he told the New York Times, “Hopefully, we’ll break even or even make a profit”. That goal won’t be hurt by Mr. Kinney’s celebrity. “We’re hoping my notoriety as a children’s author will be a draw for people,” he told the Times. To help that along, he plans to be a visible presence, working the cash register and creating his cartoons in a third-floor studio he’s having installed. Nevertheless, “This isn’t going to work if it’s just a shrine to my books,” he says.

But just in case it doesn’t work, he’s never left his day job as creative director of Poptropica, a story-based gaming website that he created in 2007. But what am I saying? There’ll always be a wimpy kid. Last year Kinney’s publisher, Abrams, order a 5.5 million copy first printing of the forthcoming ninth Wimpy Kid book, which will be published simultaneously in more than ninety countries. Wow!

Kinney isn’t the only author to open a bookstore. The most celebrated recent example is novelist Ann Patchett, whose Parnassus Bookstore in Nashville, Tennessee is going like gangbusters, helped along by her own celebrity. Other notable talents who have worked in bookstores include Larry McMurtry, Louise Erdrich, Garrison Keiller, and Lawrence Ferlinghetti. Oh, one other writer worked in a bookstore: that’d be me. When I first moved to California way back in 1973, I found a job as assistant manager of the B. Dalton Pickwick bookshop in Beverly Hills, where I was bookseller to the stars. Actually there were a number of celebrities who haunted the store. Anne Bancroft, Charlton Heston, Groucho Marx, James Caan, Esther Williams, Ann Southern, and – my personal favorite – Julie Christie, as beautiful in person as she was on the big screen in Dr. Zhivago.

If you’ve never heard of B. Dalton, it was one of America’s first chain bookstores, antedating Barnes and Noble and Borders, which – for good or for ill — closed its doors back in 2011. But that was then and this is now.

And now seems to be a good time to open or operate a bookstore. After a long period of decline, bookstores seem to be making a comeback – maybe in part because of the market created by Borders’ demise. Anyway, according to the American Booksellers Association, it now boasts some 2,100 bookstores compared with about 1,650 in 2009.

I don’t know what the growth of the bookstore community will have on book sales — a positive one, I trust — but I do know that the earlier decline was bad news to one area of the publishing industry: graphic novels; the demise of Borders was particularly hard on sales. But even earlier, sales had declined in both 2009 and 2010. Industry observer and head of the industry website ICv2, Milton Griep, explains why: “Part of that was the economy and people pulling back on buying but I also think a lot of the business is driven creatively and I think there was a little creative drought in that period.”

Despite that, sales remained a strong enough part of the overall book market that, in the spring of 2009, the New York Times launched its first graphic books bestseller list. And then, over the course of the next three years, thanks to an improving economy, an infusion of creative energy, new convention venues, and retail channels, the market rebounded and across-the-board sales shot up 35 percent reaching a bullish $870 million by the end of 2013 (the latest sales figures available). Graphic novels commanded the greatest share of that ($415 million), followed by comics ($365 million), and digital ($90 million). The $870 million figure is the highest dollar value since 1993.

One trend that has hugely impacted the comic market, just as it has that of regular publishing, is its symbiotic relationship with motion pictures and television. Multi- award-winning graphic novelist and cartoonist Eric Shanower (creator of Age of Bronze) comments: “Marvel Comics/Disney has, of course, been seeing success with adaptations of its properties into movies and tv shows. DC Comics, less so, though DC seems to be chasing the success that Marvel has found. So one might be seeing a trend among publishers with a lot of corporate-owned comics properties to try to tailor those properties to movie and tv adaptations. I don’t think these adaptations have had much impact on the rest of the field, though.”

As for the rest of the field, by mid-2015, all prospects were pleasing. Shanower continues: “Seems to me that cartooning is strong and healthy. The trends of more diverse visions and strong material that have been developing over the past couple decades show no sign of abating.”

Milton Griep is even more optimistic: “From my perspective of 40 years in the comics business,” he says, “the variety and quality of what is being published today is the greatest it’s been in my lifetime”

Graphic novel publisher Mark Siegel, First Second Founder and Editorial Director, concurs, calling this “an amazing time, a golden age, bigger than any of the others before it”

To get Siegel’s take on other current aspects of the field, I interviewed him on May 21, 2015. Here is some of what he had to say: he began by confirming that this is not only a golden age for the graphic novel form but for the creators of it as well, citing the “creative explosion of these people working in the field.”

From what he says, it seems an especially good time for writers. He cites, for example, the “blossoming of true authors aiming for depth and great writing.” Many are transcending the constraints of both the superhero and manga forms. Further, he notes that in the past, prose authors have had devoted followings; now graphic novelists do, as well. He offers, as an example, the wildly popular Raina Telgemeier.

In this connection, he points to both the growing number of influential women creators like Telgemeier informing the field (“Some of the most outstanding books of the past three years have come from women,” he says) and also the growing population of female readers, who now constitute 60 percent of the graphic novel/comic audience. He acknowledges the positive influence of manga on this development. And speaking of manga, though it is inherently “disposable entertainment,” Siegel remarks that there are nevertheless some “amazing and wonderful manga being written and drawn;” further, in that sense, the field has evolved “upward” There was a time, he wryly suggests, when it was saturated (“You could shovel it out by the pound”) but now “more and more of it is rising to the top.”

As for nonfiction, we are seeing more and more of it, too, he says, noting the field has lots of room to grow. “What’s great is that it’s a ticket to a whole other reader;” i.e. those who are attracted by the subject not the form.

Shanower is less sanguine about this, though: “Maybe there are a few more nonfiction comics being published, although it’s hard for me to tell. There always seem to be nonfiction comics coming out, often from smaller publishers. What I have seen recently are some really bad nonfiction comics brought out by creators who don’t seem to have any idea how to handle the comics form. These bad comics seem to me to be aimed primarily at the education market, which I think is a shameful situation.”

One salutary trend that seems to have arrived, though, is the enhanced critical attention graphic novels are receiving, along with major award consideration. The perfect example is First Second’s This One Summer, which — written by Mariko Tamaki and illustrated by Jillian Tamaki — was selected as both a 2015 Caldecott honor and Printz honor book, arguably the first time one book has received such dual recognition. Siegel also mentions Scott McCloud’s The Sculptor as a title that has received significant critical – and popular — attention (“it’s been translated into twelve to fifteen languages,” Siegel told me.).

Siegel reserves special praise for libraries and librarians. “There is no way we could have had this sea change without librarians. Librarians are champions of the medium,” he continues, noting that “When we started, librarians – mainly teen librarians –were the lone voice in support.” Clearly their faith has been vindicated by the evolution of the field. One thing librarians are now talking about that particularly excites Siegel is what’s being called the new mainstream. Essentially author-driven, it manifests itself in how collections are organized in libraries. More and more libraries, Siegel explains, are offering three sections of content: superheroes, manga and the new mainstream, or the author comics. In this third section, Siegel continues, there are some series but there are also many one-offs (i.e., stand-alone titles). “It’s the authors, not the series or brands that are attracting readers to this third section, which contains the kinds of books that “First Second was formed for.”

Meanwhile “the market is growing and growing and growing.” 2013, Siegel notes, was a breakthrough year for First Second (and for the field, itself). As for 2014, industry-wide graphic novel sales were up 7 percent he says, the only area of publishing aside from young adult that showed an increase. In this connection he hails the salutary influence of YALSA’s Great Graphic Novels for Teens list. “Having that call out from ALA is like a way of underscoring that graphic novels are hitting the mark.”

As for the future of the form, Siegel says First Second has felt little impact from the newly digital (“It’s kind of negligible”). (Shanower agrees: If there’s a large audience rushing to read the digital editions, I have yet to hear of it, he told me. I know from the sales of my own comics published digitally that they are downloaded but not in huge numbers.”)

As Siegel speaks, it’s obvious that he highly values the book as a physical object, as an artifact. “These are books you’re going to save for the next generation to read and savor.” “There is now a graphic novel for every kind of reader,” he concludes.

Good news for them and for the industry, as well.